1. If every alternative letter of the English alphabet from B onwards (including B) is written in lowercase (small letters) and the remaining letters are capitalized, then how is the first month of the second half of the year written ?
(a) JuLY
(b) jULy
(c) jUly
(d) jUIY

Directions for the following 7 (seven) items : Read the following five passages and answer the items that follow each passage. Your answers to these items should be based on the passages only.
Passage – 1
India’s economic footprint, given its population, still remains small compared to the US, the European Union or China. It has much to learn from other economies, yet must implement solutions that fit its unique circumstances. India especially needs an effective long-term regulatory system based on collaboration rather than the current top-down approach. Regulations seek desirable outcomes yet are repeatedly used as political tools to push one agenda or another. Often, regulations fail to consider impacts on jobs and economic growth – or less restrictive alternatives. Regulations may be used to protect local markets at the expense of more widely shared prosperity in the future. Additionally, regulations inevitably result in numerous unintended consequences. In today’s hyper competitive global economy, regulations need to be viewed as “weapons” that seek cost-justified social and environmental benefits while improving the economic well-being of most citizens.

14. Which one of the following is the most logical, rational and crucial inference that can be derived from the above passage ?
(a) A better regulatory system will help India achieve the size of economy appropriate to its population.
(b) In a competitive global economy, India must use regulations strategically.
(c) Regulations in India do not favour its integration with today’s hyper competitive global economy.
(d) Job creation and economic growth should be dominant considerations in developing India’s regulatory system.

15. On the basis of the above passage, the following assumptions have been made :
In today’s global economy,
1. regulations are not effectively used to protect local markets.
2. social and environmental concerns are generally ignored by the governments across the world while implementing the regulations.
Which of the above assumptions is/are valid ?
(a) 1 only
(b) 2 only
(c) Both 1 and 2
(d) Neither 1 nor 2

Passage – 2
In a study, scientists compared the microbiomes of poorly nourished and well nourished infants and young children. Gut microbes were isolated from faecal samples of malnourished and healthy children. The microbiome was “immature” and less diverse in malnourished children compared to the better developed “mature” microbiome found in healthy children of the same age. According to some studies, the chemical composition of mother’s milk has shown the presence of a modified sugar (sialylated oligosaccharides). This is not utilized by the baby for its own nutrition. However, the bacteria constituting the infant’s microbiome thrive on this sugar which serves as their food. Malnourished mothers have low levels of this sugar in their milk. Consequently, the microbiomes of their infants fail to mature. That in turn, leads to malnourished babies.

16. Which one of the following is the most logical, rational and crucial inference that can be derived from the above passage ?
(a) If malnourished condition in children is caused by gut bacteria, it cannot be treated
(b) The guts of malnourished babies should be inoculated with mature microbiomes.
(c) Babies of malnourished mothers should be fed with dairy milk fortified with sialylated oligosaccharides instead of mother’s milk.
(d) Research on benign effects of gut bacteria on nutrition has policy implications.

17. On the basis of the above passage, the following assumptions have been made:
1. Processed probiotic foods are a solution to treat the children suffering from malnutrition due to immature gut bacteria composition
2. The babies of malnourished mothers generally tend to be malnourished.
Which of the above assumptions is/are valid?
(a) 1 only
(b) 2 only
(c) Both 1 and 2
(d) Neither 1 nor 2

Passage – 3
Temperatures have risen nearly five times as rapidly on the Western Antarctic Peninsula than the global average over the past five decades. Researchers have now found that melting glaciers are causing a loss of species diversity among benthos in the coastal waters off the Antarctic Peninsula, impacting an entire sea floor ecosystem. They believe increased levels of suspended sediment in water to be the cause of the dwindling biodiversity in the coastal region.

18. On the basis of the above passage, the following assumptions have been made :
1. Regions of glaciers warm faster than other regions due to global warming.
2. Global warming can lead to seafloor sedimentation in some areas.
3. Melting glaciers can reduce marine biodiversity in some areas.
Which of the above assumptions is/are valid?
(a) 1 and 2 only
(b) 3 only
(c) 2 and 3 only
(d) 1, 2 and 3

Passage-4
A research team examined a long-term owl roost. Owls prey on small mammals and the excreted remains of those meals that accumulated over the time, provide us an insight into the composition and structure of small mammals over the past millennia. The research suggested that when the Earth went through a period of rapid warming about 13,000 years ago, the small mammal community was stable and resilient. But, from the last quarter of the nineteenth century, human-made changes to the environment had caused an enormous drop in biomass and energy flow. This dramatic decline in energy flow means modern ecosystems are not adapting as easily as they did in the past.

19. On the basis of the above passage, the following assumptions have been made :
1. Global warming is a frequently occurring natural phenomenon.
2. The impending global warming will not adversely affect small mammals.
3. Humans are responsible for the loss of the Earth’s natural resilience.
Which of the above assumptions is/are valid ?
(a) 1 and 2 only
(b) 3 only
(c) 2 and 3 only
(d) 1, 2 and 3 only

Passage – 5
Food varieties extinction is happening all over the world — and it is happening fast. For
example, of the 7,000 apple varieties that were grown during the nineteenth century,
fewer than a hundred remain. In the Philippines, thousands of varieties of rice once
thrived; now only up to a hundred are grown there. In China, 90 percent of the wheat varieties cultivated just a century ago have disappeared. Farmers in the past painstakingly bred and developed crops well suited to the peculiarities of their local climate and environment. In the recent past, our heavy dependence on a few high yielding varieties and technology-driven production and distribution of food is causing the dwindling of diversity in food crops. If some mutating crop disease or future climate change decimates the few crop plants we have come to depend on to feed our growing population, we might desperately need some of those varieties we have let go extinct.

20. On the basis of the above passage, the following assumptions have been made :
1. Humans have been the main reason for the large scale extinction of plant species.
2. Consumption of food mainly from locally cultivated crops ensures crop diversity.
3. The present style of production and distribution of food will finally lead to the problem of food scarcity in the near future.
4. Our food security may depend on our ability to preserve the locally cultivated varieties of crops.
Which of the above assumptions are valid ?
(a) 1 and 3
(b) 2 and 4
(c) 2 and 3
(d) 1 and 4 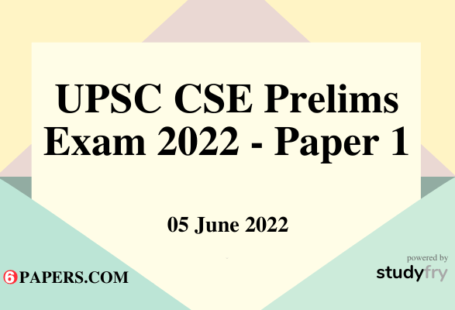