21. During the freedom movement, who among the following revolutionary turned into a philosopher ?
(A) Rash Behari Ghosh
(B) Aurobindo Ghosh
(C) V. D. Savarkar
(D) Satyendra Nath Bose

22. Who among the following has been Speaker of Haryana Vidhan Sabha for maximum number of times ?
(A) Kuldeep Sharma
(B) Harmahendra Singh Chadda
(C) Satbeer Singh
(D) Ashok Kumar Arora

23. During the suzerainty of the British crown, Princely States covered what portion of the land area of the British Indian empire ?
(A) One-third
(B) One-fourth
(C) One-tenth
(D) None of the above

26. 15th of August was Wednesday, then August of the same year was
(A) Thursday
(B) Wednesday
(C) Friday
(D) Saturday

30. Consider the following statements and choose the incorrect regarding Meghalaya plateau.
(A) It is further subdivided into Garo Hills, Khasi Hills, Jaintia Hills
(B) Plateau stand detached from the main Peninsular Block
(C) It is also rich in mineral resources like coal, iron ore, sillimanite, limestone and uranium
(D) This area receives maximum rainfall from the north-east monsoon

34. Joginder Singh is a litterateur from
(A) Jalsa
(B) Shahabad
(C) Panipat
(D) Ambala

35. Which of the following statement/s is/are true regarding 97th Amendment of the Constitution ?
(A) It made the right to form Self Help Group as a Fundamental Right
(B) It has brought a new provision into the Part IV of the Constitution (Directive
Principle of State Policy)
(C) Both are wrong
(D) Both are right

37. The Champions of the Earth’ Award is presented by
(A) UNDP
(B) UNFCCC
(C) UNEP
(D) UN General Assembly

39. Which of the following hills serve as a connecting link between Himalayas and Plains ?
(A) Tipra Hills
(B) Morni Hills
(C) Aravali Hills
(D) Ambala Hills 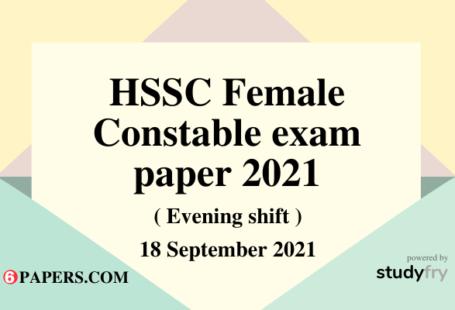