22. After Britishers took over half of the kingdom of Garhwal, the king Sudarshan Shah established his capital in :
(A) Pauri
(B) Chamoli
(c) Tehri
(D) Uttarkashi

25. Whose rule in Uttarakhand is historically known as the ‘Golden age’ ?
(A) Katyuri empire
(B) Magadha empire
(C) Kunida empire
(D) Gorkha empire

27. The name of Rajaji National Park has been dedicated to which famous person ?
(A) Raja Harish Chandra
(B) C. Rajagopalachari
(C) Raja Harkishan Singh
(D) None of the above

28. The correct option after arranging the words given below in a meaningful sequence will be:
(1) Probation
(2) Interview
(3) Selection
(4) Appointment
(5) Advertisement
(6) Application

29. Who was the first king of Garhwal to use the title of Shah’ ?
(A) Balbhadra Shah
(B) Pradyuman Shah
(C) Manvendra Shah
(D) None of the above

33. Which is false statement about Raman ?
(A) It is a folk festival of district Chamoli
(B) It is a dance with Mask
(C) Use of ‘Dhol’ is prohibited in it
(D) This has been declared a World Heritage by UNESCO

34. which of the following is not available on the ruler of M.S.Word screen ?
(A) Tab Stop Box
(B) Left Indent
(C) Right Indent
(D) Center Indent

36. In the given grid, the number at the place of question mark will be :

37. The famous temple ‘Hat-Kalika’ is situated at ?
(A) Badrinath
(B) Kedarnath
(C) Joshimath
(D) Gangolihat

38. From the following, the correct full form of S.M.P.S. is: .
(A) Switch Mode Power Supply
(b) Simple Multiple Power Sockets
(C) Serial Main Power System
(D) None of the above

39. Dr. Diwan Singh Bhakuni is associated with :
(A) Art
(B) Literature
(C) Drug Scientist
(D) None of the above 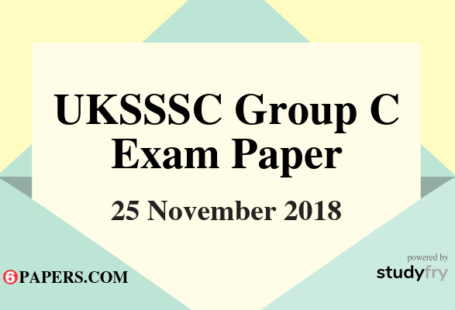